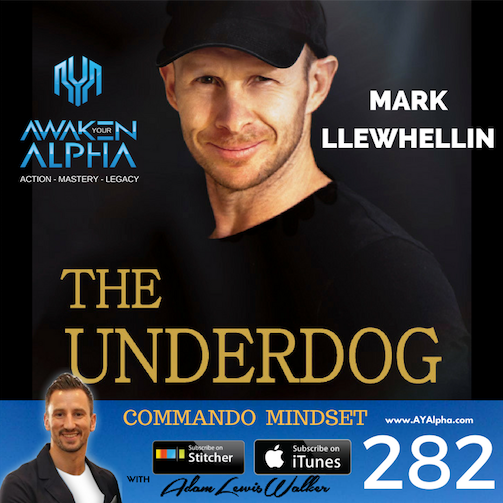 Following his theme of taking everything to the extreme Mark is currently writing 100,000 WORDS a month in his pursuit to become a full time writer!

Ex British Commando Mark Llewhellin joined the British army at the age of 16 and served with Junior Leaders Regiment, Royal Artillery. Mark initially failed his one and a half mile run basic fitness test, was bullied and was voted the fattest person in his troop. After a year and a half of fitness building and failing twice (once through lack of fitness & once through injury) Mark successfully passed the British All Arms Commando Course and earned the right to wear the coveted Green Beret.

After serving 7 years in the army (mainly with 7 Commando Battery, 29 Commando Regiment, Royal Artillery) Mark moved to London and worked as a Bodyguard in London’s exclusive Park Lane. Mark’s successes went from strength to strength.

In 2001 he broke the 100 kilometre treadmill world record.

In late 2013 Mark hit the front page of the local newspaper, when he publicly ripped up his council tax form in defiance against corruption. Against the odds Mark set a snowball rolling that would make changes at the highest level in his County Council.

In 2014 and 2015 Mark came 1st on the Strava Distance Challenge out of over 51,000 runners. Mark has been featured in all the main national newspapers and has travelled to over 50 countries around the world.

Mark is an inspirational public speaker and is working on multiple books, the first “The Underdog” was released 2016.  He lives in Wales for most of the year and is a very proud and grateful father.

Podcast by the Numbers:

3 MIN – COMMANDO ORIGINS!
6 MIN – WHY was the Commando process so powerful?
8 MIN – The power in being the UNDERDOG.
10 MIN – 100k Treadmill WR and the STRAVIA Distance challenge.
12 MIN – What would you do in this situation at 2am in the morning?
14 MIN – The Mindset of an Underdog.
16 MIN – Who helped AWAKEN YOUR ALPHA?

THE ALPHA ROUND: 20 MINUTES

Finally Mark has some words of advice for Russel Brand to finish the show!

THANKS TO OUR SPONSOR:

AWAKEN YOUR ALPHA WITH ALW
*Facebook Group for daily interaction with me, the guests and the other listeners of the show.

The SHOW IS NOTHING WITHOUT YOUR SUPPORT – Please Subscribe using either the iTUNES or STITCHER buttons below, cheers.