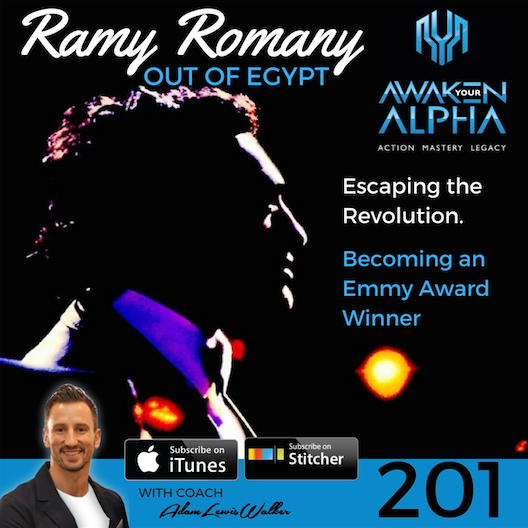 EMMY® Award Winning Director & Cinematographer, Ramy Romany, resides in Los Angeles, California and has filmed, produced and featured in documentaries and TV Shows for more than a decade.

Born in Cairo, Egypt, into a documentary-producing family, he was given the opportunity to develop and finely craft his impressive array of skills on film sets located on Ancient Egyptian ruins, gaining experience in the many aspects of film-making from an early age.

In a story worthy of a Hollywood movie, my friend Ramy Romany​ recalls the recent revolution from inside Egypt and how the got out, JUST! You have to hear this.

He has produced, directed, filmed and featured in over a hundred Documentaries on Ancient Egypt before the age of 20 for a variety of international networks such as Discovery, History and National Geographic.

Ramy’s passion for film-making increased over time, and he then decided to focus his energies into a career in cinematography. After many years filming documentaries on Ancient Egypt, political circumstances led him to flee his home and relocate to Los Angeles, CA where he lives with his wife and their two children, and is continually inspired by Los Angeles’ diversity.

This move provided Mr. Romany, already well known in Egypt for his expertise in film production, with a new network of contacts, projects and opportunities to further showcase and expand his abilities. Due to enthusiastic recognition and demand for his unique experiential background and years of working in the movie industry, he was contacted, and secured, positions which enabled him to travel the Americas filming documentaries and popular TV shows.

In 2013, before the age of 30, Ramy was nominated for two EMMY® Awards for his cinematography work on 2 different documentaries he filmed in Mexico and the Dominican Republic, and was honored to win an EMMY® for Best Cinematography on a topical documentary.

“Expert on all things Egyptian” as Joanna Lumley calls Romany on national British Television. With his degree in Ancient Egyptian History and Archaeology, Romany has been featured on multiple documentaries and TV shows on major networks such as Brew Masters for the Discovery Channel, Destination Truth for SyFy network, Ancient Aliens for the History Channel, What Lies Beneath for the BBC TV, and the Long Way Down for National Geographic, as an Expert in his field.

In 2015, Ramy was nominated for another two EMMY® Awards for his cinematography work on 2 different documentaries he filmed in Mexico “Armonia”, and nationally “Visioneer”, and was honored to win an EMMY® for Best Cinematography on a topical documentary for his work on Visioneer.If you do want more for yourself, starting now not some time off in the future, lets talk about how YOU are going to make that a reality…